Comments Off on Weekend Line-Up 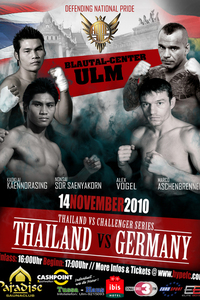 November and December are busy months in kickboxing, but this weekend kind of slips between the cracks. Not a ton of huge fights to talk about here.

The biggest show is Sunday’s Thailand v. Germany show presented by Elite Boxing. The main event of that show will see the #18 ranked Leroy Kaestner face Cagri Ermis. A protege of Peter Aerts, Kaestner has a number of good wins on his resume in recent years, including a defeat of Gago Drago in May and a K-1 MAX Europe GP win in 2009. But he’s not yet been able to put together that solid string of victories that propels him into the upper levels of the division. Ermis is a late replacement for original opponent Yavuz Kayabasi. Ermis has faced a number of the 70kg division’s top names over the years, including Nieky Holzken, Giorgio Petrosyan, and Pajonsuk, although he has typically ended up on the losing end.

Although that is all for kickboxing, there are a few other fights worth noting. Saturday night’s UFC 122 (free on Spike TV) includes a fight from former K-1 MAX competitor Duane “Bang” Ludwig. Ludwig still displays strong kickboxing skills, and will put them on display against Nick Osipczak Saturday. Unfortunately, it’s a prelim fight, so chances are good it will not air. UFC 122 also includes Dennis Siver on the main card. Siver has shown moments of stand-up skills that have really caught my eye, most notably his big spinning back kick KOs. Kickboxing fans should check him out as he faces Andre Winner.

Finally, I would be remiss if I did not point out that Saturday night is also Manny Pacquiao v. Antonio Margarito. Pacquiao is one of the most gifted fighters competing in any discipline today, and anyone who is a fan of stand-up action should try to tune in. For great coverage of this fight, be sure to check out our neighbors at BadLeftHook.