Thailand Versus Germany – Thailand Vs. Challenger

Thailand Versus Germany – Thailand Vs. Challenger

Comments Off on Thailand Versus Germany – Thailand Vs. Challenger 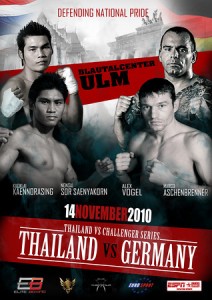 Elite Boxing has now announced the details of one more event in the Thailand vs. Challenger (2010) Series for Novemeber 14th, 2010. The 2nd of the series happened at the Queen’s Birthday in Thailand. In November, Elite Boxing will take two members of their team to Ulm, Germany to compete in an event co-promoted by Elite Boxing and Hype FC. The rules for the matches are a mix of K-1 style rules matches and full rules Muay Thai rules matches. This is another installment in Toli Markis’ Elite Boxing Promotions. Toli is something of a protege under Songchai Rattansuban’s guidance. Though notably not all the cards have been able to come together as first planned.

Most of the card will be Hype FC (German co-promoter for this card) events with 2 of the fights being Thailand versus Challenger bouts. Nonsai Sor Sanyakorn was scheduled to take part in the Queen’s Birthday installment of Thailand Versus Challenger but could not participate apparently due to an injury from a motorcycle accident. I have not seen Nonsai since he legitimately got knocked out at Wu Lin Feng by his Chinese opponent so it could prove interesting to see how he performs since that loss. Nonsai is basically the center piece of Elite Boxing’s roster of signed fighters and I imagine Nonsai will have much to live up to in this fight.

Also scheduled for the event:

The matches are still being made and announced as of this post time. Ticket information can presumably be found on Elite Boxing’s official site.

Source: The Science of 8 Limbs