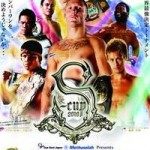 I said it would take a massive upset to prevent a Buakaw Por. Pramuk v. Andy Souwer final at the Shootboxing 2010 S-Cup, and as it turns out, that’s exactly what happened. MMA fighter Toby Imada, a late replacement for Charles Krazy Horse Bennett, earned a split decision victory over Andy Souwer in the semi-finals to knock the defending champion and world’s #2 fighter out of S-Cup competition and claim a spot in the finals. On the other side of the bracket, Buakaw took a unanimous decision win over Henri van Opstal, setting up an unlikely Buakaw v. Imada final.

In the finals, Buakaw used leg kicks to chop down the Bellator fighter, earning a 2nd round TKO and claiming the title of 2010 S-Cup champion. This win has to be satisfying for Buakaw, who left K-1 MAX in frustration earlier this year, and has spent 2010 taking a limited number of smaller fights while questions swirled about his future. With this win, he reclaims his spot as one of the top 2 fighters in the world, and shows that there is still more left in the tank of this legend.

As for Souwer, this is obviously a serious shock for the multiple time MAX and S-Cup champion. A nearly flawless fighter, Souwer is the kind of fighter who just doesn’t lose to opponents not at the very top of the game. Outside of the earliest part of his career, he only has one loss to a significantly lower ranked opponent – a 2006 loss to Kenichi Ogata, also at the S-Cup. Imada is almost exclusively an MMA fighter. He’s been competing in Bellator as of late, where he is best known for his spectacular flying inverted triangle submission of Jorge Masvidal last year. Outside of that fight, he has no other big wins, and is 26-14 in MMA action. There’s no video of the Souwer fight yet, but reports seem to indicate Imada used throws effectively, while closing the distance to limit Souwer’s attack.

Quarter-finals saw Souwer defeat Bovy via TKO in the 3rd round in what sounds like a great fight, Imada upset Umeno via KO in 3, Buakaw decision Shishido, and Henri van Opstal earn the decision win.