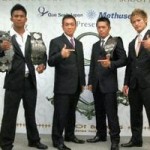 Shootboxing held a press conference today to announce details of the 2010 S-Cup, and they unveiled a huge announcement. Making his Shootboxing debut at the S-Cup on November 23 will be former two time K-1 MAX champion Buakaw Por. Pramuk. This is a huge score for Shootboxing, as Buakaw is one of the top kickboxers in the world, and his presence will certainly draw more international attention to this event.

The exact details of Buakaw’s fight are still being worked on. It is definite that he will be fighting at the S-Cup – what is unsure yet is if he will fight in the S-Cup tournament itself, or if he will take part in a non-tournament super fight. Shootboxing currently has 7 of the 8 participants confirmed, and while Buakaw is an option for that 8th slot, it could also go to someone else. For his part, Buakaw has stated he will be happy with whatever fight is offered, but would be interested in fighting in the tournament.

The 7 names confirmed for the S-Cup 2010 are: Andy Souwer (defending champion), Hiroki Shishido, Takaaki Umeno, Bovy sor. Udomson, Charles Krazy Horse Bennett, Henri van Opstal, and Greg Foley. Other possible fighters who could be involved include Hinata, Su Hwan Lee, and Satoru Suzuki. That’s a good line-up, but the addition of Buakaw would raise the level of the tournament considerably. In a year where the MAX Grand Prix only has 2 of the division’s top 5 taking part, an S-Cup that includes #2 Souwer and #3 Buakaw would be on par with the higher profile MAX event.

Speaking of MAX, Buakaw had this to say about his former home: “My contract has ended and I’m going forward on a new road now.” There has been talk of Buakaw dropping down to 63kg in K-1, but these comments indicate that we won’t see Buakaw in K-1 any time soon, no matter the division.

Looking at the current S-Cup line-up, Souwer is the heavy favorite to once again claim the title, and if Buakaw comes in, another showdown between these two rivals seems inevitable. Shootboxing veteran Hiroki Shishido will look to be the spoiler this year, but he will have his work cut out for him if he wants to topple either Souwer or Buakaw. The one advantage Shishido has is his comfort with the Shootboxing rules, which he often uses to his advantage against less Shootboxing-experienced opponents.

Shootboxing always puts on fun shows, and the S-Cup is an exciting alternative to the Grand Prix. With this line-up, and the involvement of Buakaw, this has suddenly become one of the biggest events in this busy year end stretch. I look forward to seeing how the brackets shake out, and who claims the final spot.