Comments Off on F16 recapitulation 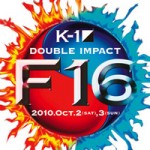 October 2, 2010 – Seoul, South Korea – Finally, the time was upon us for the first half of the much awaited Double Impact F16 event. Tonight was the K-1 fighters, and there wasnt a single one of them on the card not breaking their neck trying to qualify for the Final 8. As the card played out, we saw amazing knockouts, some dominating performances and some very close back-and-forth battles.

The first of the Final 16 fights was between veteran fan favorite, Ray Sefo and Ernest Hoost prot?g?, Tyrone Spong. Sefo stepped into the ring against Spong with just 5 days notice as a late minute replacement for Ruslan Karaev after the Russian fell ill. He wasnt quite as explosive as we are used to seeing him, and spent a lot of the first round blocking low kicks and taking shots on his guard. He was far from inactive though, and his boxing combinations looked solid. He came back to pressure Tyrone in the second with a pair of solid spinning-back kicks to the midsection, and some snappy boxing. In the third round the extra gas did Tyrone well, and he threw absolutely everything he had at Sefo. The veteran never went close to going down though, and still had the odd trick up his sleeve though. The match went the distances and all 3 judges agreed that new generation fighter, Tyrone Spong took the bout.

Gohkan Saki was supremely confident in facing Frenchmen Freddy Kemayo. He proved why in this bout as it was almost one single combination from the start until Kemayo took his third down of the first round. The power and speed of which his combinations were thrown would have made even the great Ernest Hoost envious. He hurt Kemayo with a solid shot early on and just didnt give him room to breath until the the referee stepped in to save Freddy from taking any unnecessary damage.

Fellow Golden Glory fighter, Errol Zimmermann was next to the ring. He was there to face the Romanian, Daniel Ghita. Daniel managed to keep Errols rhythm off for most of the first round, and he was diligent at keeping his guard high. Errol was throwing, but not finding his mark while it seemed like he got drilled every time a low kick landed. And they were plentiful. Zimmermann started the second round looking aggressive and came out of the corner quickly. He threw a jumping knee, but it seemed like Daniel timed it well, and his left hand found the temple of Zimmermann. Errol wobbled for a second, but it was enough to give Daniel a taste of the blood he wants. He closed the distance and landed another left, followed by a right that totally turned his lights off. Equilibrium shot he began to fall, and coped one more right on the way down to ensure he wouldnt be beating the count. He didnt. Daniel quick went to check on his opponent, and after some minutes Errol managed to get to his feet and return backstage.

Jerome LeBanner was up next, and I cant remember ever seeing him so pumped up for a fight. He entered the ring and walked straight up to his opponent, Kyotaro, and gave him the death stare. The bout began and Kyotaro seemed to start his warm up then and there, but running laps around the ring for several minutes. Finally, they started to fight and mixed it up very well. Both landed some nice shots. In the second round a fired up Jerome really took it to the heavyweight champion, and while Kyotaro did land a couple of his counter punches, they were less in number and didnt seem to rock LeBanner. The Frenchmans shots were making kyotaro stumble, but it was impressive that his chin could absorb them! It surprisingly went to the final round, and both fighters caused the other to stumble more than once here. Cosmetically, Jerome was bleeding, and Kyotaro seemed to feel the pressure that he needed to take this round convincingly. LeBanner never once stopped pushing the fight during the round, and threw his hands in the air at the end of the fight to a roar of approval from the fans. One of the judges agreed with him, yet 2 others called a draw. An extra round was called for, and in apparent protest, LeBanner walked out of the ring and did not return. By default, Kyotaro was announced the winner.

Mr. K-1 then made his way to the ring to face Mr. Kyokushin. Peter Aerts was the favorite against Ewertom Teixeira, as he has some 18+ years of kickboxing experience under his belt. Ewerton trained hard for this fight though, and it showed. They both went into the first looking to stop the other, and ewerton showed much improved hands and overall combinations. He went to work on Aerts front leg with both inside and outside low kicks. Neither moved backwards, and a hook at the end of the first round put a slight wobble into Aerts step. The second opened with Aerts having some trouble getting through the constant combinations of the kyokushin ka. He started using his own low kicks to close the distance before using his punches and they both let fly. The final round was also a very aggressive one, and neither was willing to give the other an inch, and both landed some solid shots. Towards the end of the round Aerts again stumbled after a big right hand, but he came back hard. The bell rang and the judges handed out the second draw of the night. This time both fighters fought the extension round. It was a near repeat of the earlier rounds with the acceptation that Ewerton was cut towards the end. While there must have been little more than a hair in it, this time the judges awarded the fight to Peter Aerts.

Raul Catinas trained to face ex-UFC champion Andrei Arlovski but wound up facing slugger, Might Mo, after Andrei pulled out. Raul went into the first round with a good gameplan: take out the power-punchers legs. It was working well too, until he ate a left hook that led to him taking a closer look at the canvas than he would have hoped. He came back from the 8 count, and went back to throwing bombs of his own and low kicks. The second round was a messy slugfest, where both delivered and received more punches that the surgeon general would deem advisable. Both were gassing bad and shoot from the hip. The third and final round was much of the same, until Mo landed a right hook that rocked Raul and had him doing some sort of rap dance move until the end of the round. On just a day or two notice, Might Mo managed to qualify for the Final 8 for the second time.

Hesdy Gerges has fought, and lost to, Semmy Schilt once before. He came here tonight looking for revenge. This time he had much more than 24 hours notice for the fight, and he was sure that would be the deciding factor. When the opening bell rang, he immediately had Semmy moving backwards, and kept the pressure up. Semmy really tested his guard with the jab, and his midsection with his beloved step up knee. Be that as it may, Hesdy kept coming forward. In the second it was much of the same. The fight ebbed and flowed in each fighters direction at times, until Hesdy landed a beautiful overhand right causing Semmy to to be cautious for the remainder of the round. The final was upon us, and Hesdy managed to make Semmy look human. Hesdy mixed up his low kicks with his shots rather than just go headhunting, and it helped him score some more points. Semmy did keep up his offense too, but it was clear that Hesdy was earning the respect of the fans. The bout ended, and the judges awarded a relieved looking Semmy with the win. The crowd gave a standing ovation to Hesdy as he left the right though.

Oceania GP Champion, Ben Edwards had his dream come true by making it to this F16 event. His opponent was “The Reem.” Edwards finished his tournament in record time, all with first round knockouts, so the excitement for this fight among the crowd was electric. Alistair came into the bout without his usual knees, but the clear improvement in his hands was enough. In fact, within the first round he managed to drop Ben with his hands not once, not twice, but a total of 3 times. Not replying on only his power this time, he used some great technique as well. At one stage he even pushed Bens guard away with his left hand to power in a right hook, for one of the downs. His improved defense also makes him so much harder to catch than last year. The domination of such an opponent shows he is not just a MMA fighter dabbling in K-1 anymore, but a true contender.

In other fights on the card, Dzevad Poturak defeated Chalid after the towel was thrown at the start of round 3. Dzevad pushed the action with leg kicks from the start, and it being Chalids first fight back in 2 years really showed. He tried his best, but had trouble finding a home for his punches. Additionally Sergey Kharitonov beat Takumi Sato by referee stoppage in the first round after catching him with a flurry that the Kyokushin fighter just couldnt recover from.

Tyrone Spong, Gohkan Saki, Daniel Ghita, Kyotaro, Peter Aerts, Mighty Mo, Semmy Schilt and Alistair Overeem all earned their spot in the Final 8. It is made up of veterans, and new generation fighters. The relatively small, and the massive giants. Punching specialists, kickers, aggressive brawlers and counter technicians. It looks like it will be one hell of an exciting World Grand Prix. Events Producer Mr. Tanikawa also mentioned he wants to give Badr Hari a reserve spot if he is available, making things potentially even more interesting. Make sure to keep your checking back for more news about the WGP, information on the official draw, and for the second half of Double Impact, World MAX!