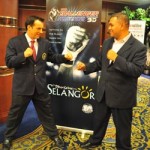 A joint press conference was held in Bangkok to announce the upcoming Challenger Muaythai Generation 3D TV series which will be held in Malaysia and commence in October. The press conference was held by the World Muaythai Council, the Malaysian Muaythai Federation, and Osys Group of Companies. Selangor, Malaysia, will be the venue, and 16 of the best muaythai fighters from around the world will travel to participate in this Challenger reality series.
The final of the event will be a 2hr 3D feature length special, which is an absolute first in the history of martial arts. The President of the Malaysian Muaythai Association, Mr Shahnaz Azmi made an emotional speech showing his pride that Challenger will be held in Malaysia, as it will not just promote the culture and the art of muaythai, but also Selangor and Malaysia. Mr Azmi expects immense growth in the popularity of muaythai during the screening of the 13 episodes, which will be shown in over 40 countries worldwide.
Stephan Fox, who will be the host of the show, stated that all fighter have been carefully selected through ranking and qualification process, and he announced the two trainers, who will be the famous Clifton Brown (former WMC World Champion from Canada) and Australian muaythai personality Kerry “Nugget” McNaught.
Challenger is an important tool to promote muaythai towards IOC recognition, as the audience will learn about the cultural, tradition, ethics and fair play aspects of muaythai. The Privy Council of His Majesty the King, the President of the WMC, the President of IFMA, and many more, were part of the press conference in Thailand and will now work towards bringing the next Challenger series to be held in the motherland of the sport.