Thai Fight First Round Announced – The Science Of 8 Limbs

Thai Fight First Round Announced – The Science Of 8 Limbs 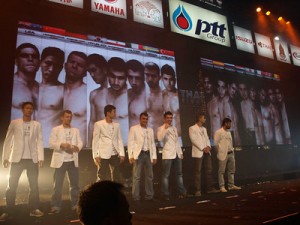 The Thai Fight First round draw is now official. Much thanks to Bobo Sharos and Phon Martdee for sharing the information.

On hand to help promote the event were many of Muay Thai’s biggest names from Thailand including Buakaw Por Pramuk, Yodsaenklai Fairtex, Saenchai Sor Kingstar, Anuwat Kaewsamrit and other current stars.  There were also present at the press conference some legendary names of Muay Thai’s past like Podpadnoi Woravut, Samart Payakaroon, and Dieselnoi. 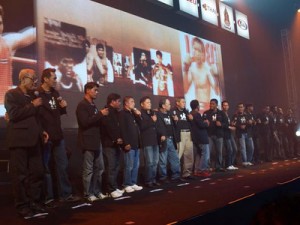 Unfortunately, United States nak muay Kevin Ross will not be participating in the Thai Fight event.  Kevin Ross has stated that due to his participation in The Toyota Cup 8-man event he has been forbidden in participating in the Thai Fight tournament.  Ross also further stated he did not want to miss out on the opportunity to fight in the Toyota Cup because as is well known fights and cards sometimes fail to come together.

The official rules for the contest will be 3 times 3 minute rounds with a 2 minute interval rest between rounds, with full Thai rules. It will be contested at Indoor Stadium Hua Mark that has a  15,000 seat capacity. The press conference itself reportedly had an attendance of 2000 fans and press.