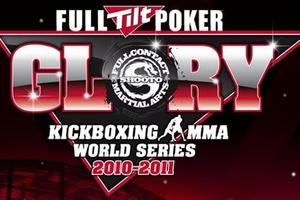 Starting October 16 in Amsterdam, they will host an event they are dubbing the “Kickboxing and MMA World Series”. There will be two separate 8-man tournaments, one for kickboxing and one for MMA, held over 3 events. The quarter final rounds will take place at the October event; semi-finals in February in Belgium, and finals in April in The Netherlands. The 8 participating fighters have been announced for the tournament, and they are:
16 октября в Амстердаме стартует действие, полуфиналы пройдут в Бельгии в феврале, а финалы в апреле в Нидерландах.

Although you could point out the lack of a Hari, Schilt, or Bonjasky, I think this is actually a super competitive tournament with some great names. You’re looking at one top 5 fighter, one top 10, 3 more top 25, and the remaining 3 all just outside the rankings. There’s a lot of very intriguing match-ups here, especially because as the tournament progresses we’ll almost have to see teammate v. teammate from Golden Glory. The two tournament favorites have to be Zimmerman and Saki, which is a fight I would love to see. Both men are close friends, but GG fighters have shown a willingness to fight in the past, and I can’t imagine they would have signed on without knowing that was a real possibility.

On the MMA side: В турнире по ММА:

Pretty clearly one name jumps out here and that is Shinya Aoki. This is a HUGE coup for Golden Glory to get his involvement. Now let’s just hope he actually does take part, as there is a small part of me that has concern over such a huge name being snuck in with no previous warning.
Сомнительно конечно, что все бойцы, особенно Аоки, все же окажутся в карде, но поживем-увидим.

The tournament will take place at Welterweight, which is the natural weight class for most of these fighters. Of course, Aoki’s last venture up to WW proved disastrous, so I am not sure what is motivating the step up again here. But there are some fantastic match-ups to think about here – Zaromskis v. Daley would be great, as would Aoki v. Thompson.

If this card goes according to plan, this could be a major event. It definitely has the potential to be a big moment in the history of not just Golden Glory, but MMA and kickboxing in Europe.