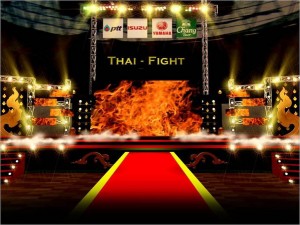 A few days ago I announced Thai Fight, a particularly ambitious all Thai produced Muay Thai event coming in the wake of the red shirt protesting damaging Bangkok’s Muay Thai scene a bit. Thai Fight’s 16 man tournament will also be accompanied by a reality television show covering the fighters training leading up to their fights.  Unlike the Contender there is no fighter house and the show will instead cover the fighters training at their requisite camps in Thailand.  The show is set to broadcast eventually on Channel 3 in Thailand.

This piece of news comes via Phon Martee (Trainer, promoter and organizational staff member) of Australia. It looks like though a bit late the Thai organizers are beginning to give Thai Fight a big media push beginning with a big press conference. And they have really pulled out all the stops calling upon some very big names of the past and present in Muay Thai including some truly legendary past fighters and some of the current greats of Thailand’s Muay Thai circuit. Without exaggeration this really shocked me seeing all these big names in one place.

The press confrence will be on July 21st, 2010 at the 5 star studio next to the Cambodian Embassy in Bangkok. The following information is from Phon Martee’s statement regarding Thai Fight’s press conference:

There will be a special lunch with the Muaythai superstars and stars from Thailand and around the world, all documented by alot of world wide media

Anyone who is interested in being a part of this Thai fight press conference please contact by e-mail phonsgym@hotmail.com to recieve V.I.P pass

We had a draw for the first 8 countries round robin in Bangkok. There will be another draw to match up some opponents from other countries on the July 21 at the official confrence.

All the great fighters from around the World are waiting and ready to rock!

Which fighters from the list below will be the lucky fighter!? See the lucky countries in the draw below.

Last note, take a look at the promotional brand names on the proposed setting of Thai Fight.  If those are the definite sponsors I would say with little to question they really did land some big money sponsor muscle for this event and in the domain of reality television programming that can be nearly as important as the event itself.  There is no word yet on if there is any possibility of licensing this show for non-Thai markets but I will be the first to say I bought into the concept already.  Everything wrong with the Contender Asia doesn’t seem to be an issue here at all.