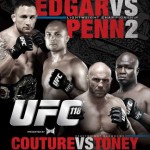 It may be billed as a showdown of two sports – boxing vs. mixed martial arts – but at least one of the principals involved doesn’t see it that way.

“There’s nothing riding on this with the sport,” says UFC legend Randy Couture, who is matched up against former boxing champion James “Lights Out” Toney in the co-main of UFC 118, August 28 on Pay-Per-View.

Despite his experience and 83-bout record in the squared circle, Toney is seen as a huge underdog against Couture when he’ll be locked inside the Octagon in his MMA debut.

“It’ll be interesting to see what James has developed specifically for this fight,” says Couture. “James poses a different style – a unique boxing style, and I’ve had to adjust tactics and training to try and be effective in a different way. But this is MMA, certainly.

“I don’t know why there has to be animosity between sports. I don’t know any MMA fighter who isn’t training, at some point, in boxing. Both fighters have mutual respect for both sports, both are completely different.”

Though he has been training to make the boxing-to-MMA transition for nine months, Toney, on the other hand, doesn’t see himself having to use anything beyond his punching power against the well-rounded Couture.

“Toney will do what Toney does best,” says Toney. “I’m not worried what Randy do. Randy is Randy and James gonna be James, and I’m winning, hands down.

Couture has been knocked out before, but says he’s confident he’s got the chin, should Toney connect.

“He brings a completely different skill set,” says Couture. “It’s an interesting fight, a crossover fight. In my estimation, there will have to be adjustments to be made. With a boxer’s stance, you have to take into account takedowns, dirty boxing clinches, kicking . . . you have to change your stance and fighting style a bit.”

Toney’s not worried, nor is he talking strategy.

“I’m not thinking about losing,” says Toney. “I’m the best fighter Randy has ever fought . . . If I hit him flush, there’s no getting up.”

And if Toney finds himself on his back?

“If he’s gonna lay on top of me, God bless him. I ain’t no female – he try, he getting knocked out.”

Couture says he’s not “terribly concerned” about getting knocked out from that position, saying, “Everything technically changes when you’re on your back – the mechanics of a punch are different.”

“I’m ready for everything and anything,” says Toney. “I’m born to win.”