Comments Off on Muaythai on ESPN Star Sports – WMC 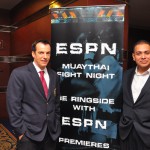 ESPN and ESPN Star Sports, the world leader in sport broadcasting has launched a new weekly muaythai programme showcasing the best fights from around the world.
A press conference was held in Bangkok to announce the commencement of the show and was hosted by the President of the WMC and many press both national and international were present.

Boo Trairatana stated “As a Thai I am honoured to help promote the sport and work with the WMC by contributing towards supporting the goal to take muaythai to the Olympics”. Stephan Fox who has hosted many muaythai programmes said “I have no doubt that this programme will be highly successful as there’s a huge following for muaythai, but it also can be used to promote all aspects of muaythai and all projects run by the WMC.”

Members of the press were treated to a special screening of the first episode of the show, which was well received.