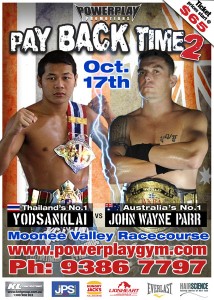 It’s official – Australian Muay Thai fighter John Wayne Parr will face Thai superstar Yodsaenklai Fairtex on October 17. The fight will be at 72.5kg and is presented by PowerPlay Promotions. This will mark the 3rd clash between these men, who first fought in 2005 with Yodsaenklai taking the decision victory. Their 2nd fight was in the finals of The Contender Asia in April 2008. Once again, Yod took the decision victory.

Since their last fight, Yodsaenklai has moved up to 76kg for his regular fighting weight. He also used that Contender win to launch a 13 fight win streak – a streak that was snapped earlier this year by Vusi Colossa. He’s made his way back to the winner’s circle since with a victory over Halim Issaoui. Though still one of the top fighters in the world, Yodsaenklai’s aura of invincibility has disapeared in recent fights, not only because of the Colossa loss, but also because of a general slow down in his performances. The common criticism of Yodsaenklai these days is that if he perceives he is winning, he sits back and cruises through the rest of his fight.

JWP had been on a hot streak heading into his Contender clash with Yodsaenklai, and has had mixed results since then, going 7-3-1. He is consistently fighting tough names like Buakaw, Zambidis, Cosmo, and is coming in off a good win over Thai fight Lamsongkram. At 34, The Gunslinger has been a Muay Thai veteran for years, and is firmly in the role of Australian Muay Thai statesman. If he wants to avenge those loses, this is the time to do it. And he definitely has a shot, as Yodsaenklai’s current style does leave the door open for a Parr victory.