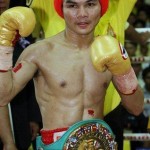 If one can say anything about this tournament its that Saenchai is very consistent in this year’s Toyota Cup. Saenchai had 3 different opponents and finished each by TKO/KO.
This brief rundown of the Toyota Cup is courtesy of Rob Cox’s point of view.
Quarter Final 1
Sanchai vs. Imran Khan
Tough draw for Imran… he’s talented as hell, and I would love to see this fight. Apparently Imran was down for an 8 count in the 2nd round via a Sanchai elbow. Then quickly downed again by a punch. Referee stoppage just short of the end of the 2nd round
Quarter Final 2
Valdet Gashi vs. Issei IngramGym (W- Points)
Quarter Final 3
Masoud Izadi (W- Points) Vs. Arturo Lin Can
Quarter Final 4
Kevin Ross (W-Points) vs. Masoud
Semi Final 1
Sanchai (Referee Stoppage) vs Issei Ingramgym
Semi Final 2 Masoud (W-Points) vs. Kevin Ross. Its been reported by all who saw the event so far that despite losing Kevin Ross put on a pretty big hurt on Masoud.
For the international boxing portion of the night Pongsaklek Wongkongkam made short work of his opponent, Rey Megrino of the Phillipines in exactly one round by way of knock out. The distance it took was 1minute and 37 seconds. Pretty exciting night and I’ll update as I get video of both the international boxing portion and the tournament portion.