Comments Off on Ong Bak 3 out soon – The Champions Club 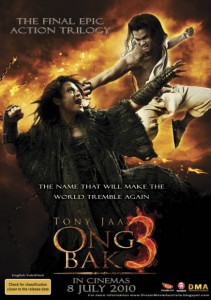 “Tony Jaa” Panom Yeerum is back and completed the ultimate action and martial arts film, considered by many critics to be the best work of Tony Jaa. After three years in the making, the conclusion of the Ong Bak series, the epic martial arts series is ready to explode into cinemas around the world, starting July 8, 2010 in Australia…
The ultimate action film the fight world has been waiting for. Thailand’s ultimate world-class martial arts film that has been most acclaimed, most successful, and made with the biggest budget in the history of Thai film.
Sahamongkolfilm International proudly presents Ong Bak 3 – from “the conclusion of the trilogy of a legendary martial arts series” To “the origin of the scar-faced Buddha” and “the man who was born to become a legendary fighter.”
Under the circle of sorrow, a man comes back to his first sin. Amid mental struggle, once he forgives, he finds inner peace and the truth. “Nattayuth” the spectacular fighting technique is born.
This is the ultimate martial arts masterpiece. Directed and starred by “Tony Jaa” Panom Yeerum, who’s known as “No wires. No stunt doubles.
Released in cinemas worldwide soon! Check your local listings for dates.