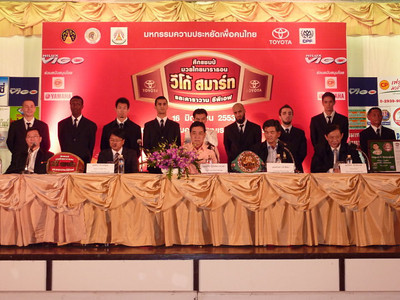 This news comes from Valdet Gashi’s official site.
This Friday, July 2, 2010 between 2:00 PM and 5:00  PM Thai time the Toyota Cup 8-man  broadcasts on Channel 7 live. For those of us in the western hemisphere it will be a 10 hours difference PDT and 12 hours difference EST.
In  Thailand the Toyota Marathon this year will be a one day event, eight-man tournament. Participation in this tournament will include fighters from eight countries. The Toyota Cup is one of the most famous Muay Thai tournaments in Thailand.
Saenchai Sor Kingstar, Valdet Gashi, Pongsanglek, Imran Khan and Kevin Ross among other international and Thai stars will be included on the card. Valdet notably just fought and recently defeated Jaraud Sit O  a former Omnoi stadium champion and a veteran of some 300 plus fights.  Valdet I have watched with some interest in his bouts in Malaysia’s Z-1 events.  Should be an overall well-matched event with a very international flavor. I will see if I can capture the event clips later on and of course post it on the Science of 8 Limbs.