Comments Off on Toyota Cup Tournament July 2, 2010 – The Science of 8 Limbs 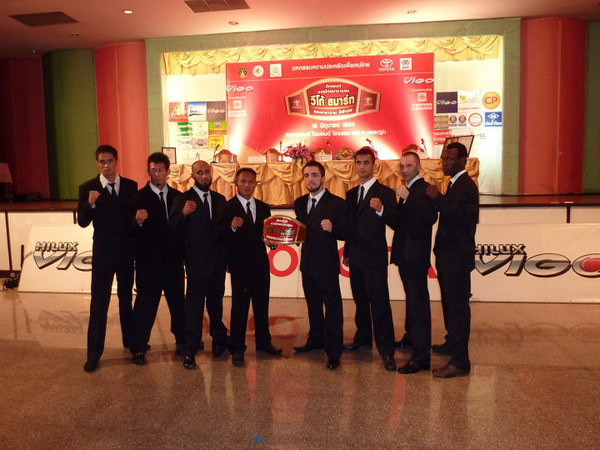 Promoted by Virat Paianun from Petchyindee Promotions brings Fighters from Thailand, UK, Spain, Japan, Iran, Turkey, Japan and the USA. Some of you may recognize Virat’s name from Lumpinee Stadium promotional activities.

From the photo above it looks like represented will be Arturo Lin, Imran Khan (due to rematch Kieran Keddle from the MSA show), Valdet Gashi , Saenchai Sor Kingstar Pongsaklek Wonjongkam, Masood Izadi, Piki-nic Peter and, Kevin Ross. The United States’ Kevin Ross looks especially busy these days having fought quite a bit in Thailand since training out of the Sitsongpeenong camp in Thailand. Kevin is also slated tentatively to participate in the Thai Fight reality TV show and international Thaiboxing tournament along with 15 other confirmed international nak muay.

Saenchai Sor Kingstar of course has been at the top of most Thailand Muay Thai pound for pound lists in Muay Thai. Saenchai is best known for fighting and beating international competition relatively easily despite giving up weight in most of those bouts. Petchmankong Petchfergus recently defeated Saenchai so this will be an opportunity for Saenchai to return to form of sorts in Thailand via an 8-man tournament.