Comments Off on 2,000,000 Baht Super Tournament in Thailand « The Science of 8 Limbs 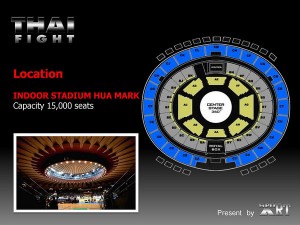 The return of reality television and Muay Thai is coming. But its not the Contender Asia or anything else you may imagine.  Thailand’s Channel 3 will be broadcasting Thai Fight instead. Initial reports of some of the named lineup look impressive and the match ups should be much more evenly matched and with a truly international roster of Thaiboxers.

Fighters to be confirmed include the following:

Reportedly, whichever countries have more than 2 fighters, have to compete in Bangkok to decide the qualifier at The Siam Omnoi Boxing Stadium on Thai TV 3.

All travelling fighters  to fight in Bangkok will receive a decent purse with five star accomodation for a week. The Thai representative is Petchmankong. He won the Isuzu Tournament (135lbs) to qualify for it. But the weight tobe contested is 147lbs

The events will take place at Rajamangkala Studium in Ramkamhaeng, Bangkok.

Mixfight has released some press show slide shows and this was interesting as an indicator of what the purses will be. 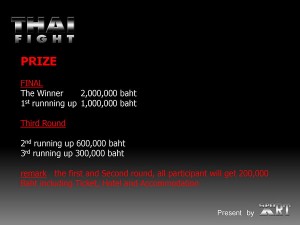 Shockingly there has been very little in the way of press about this entire event. The event will schedule 1 week for media and three fight nights. The fighters will be working out of wholly separate camps. Unlike the Contender Asia there is no shared house. Instead a camera crew will capture the fighters training and activities seperate from one another in their respective camps. Which in my limited exposure to the fight sport reality program is definitely what I prefer.

This will not be like the Isuzu Cup tournament where the tournament takes months to complete with one bout once a week. To add the competition the tournament is also a single elimination and the loser is immediately eliminated.

Filling out this event will be Tata Young famous Thai pop singer. My initial impression is that I am hopeful and cannot help but be impressed by the efforts of the organizers after the blow the red shirt protest dealt the Thai economy and how much expense this event will cost.  But the lack of press about this is incredible to me since even Thai media has done very little to report on this event and I had to find the slides themselves on a Dutch site. I will keep on this event’s developments as the story and details become more readily available.